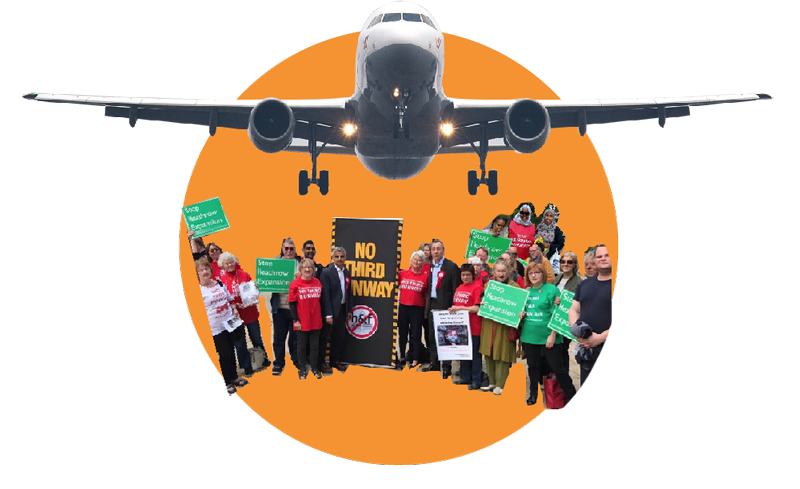 We are really pleased to announce that Paul Beckford has been appointed as the new HACAN Coordinator to replace John Stewart who will be stepping down at the end of the year after more than 20 years at the helm at HACAN. Paul Beckford is an experienced campaigner and transport expert who has successfully lobbied on a variety of transport and environmental policies over the past 15 years.   He spent eight years as Director of Parliamentary Affairs at the transport consultancy Cogitamus Ltd and has served as Policy Director for the No Third Runway Coalition since 2017.

Just days before the Department for Transport is expected to publish a consultation on night flights, 17 community and environment groups, including HACAN, have written to the aviation minister Robert Courts, calling for a ban on night flights.  Read the letter here: https://hacan.org.uk/wp-content/uploads/2020/11/Robert-Courts-MP-night-flights-letter-final.pdf

Heathrow has just announced that from Monday 9th November  that, instead of operating one runway for departures and one runway for arrivals, it will use the same runway for both.  The runway used will alternate each week to give people a break. It is possible that if it gets busy Heathrow will use both runways at the same time but it is expecting a big drop in traffic during this lockdown period.

A useful report was given by the airport on the current state of play.  Below are the main points:

The Supreme Court hear dHeathrow’s appeal against the ruling of the lower Court of Appeal that the National Policy Statement, which allowed Heathrow to prepare its case for a third runway, was illegal  on 7th and 8th October.

A verdict is not expected until early 2021.

For details of the Supreme Court’s decision to allow the appeal: https://www.supremecourt.uk/news/permission-to-appeal-decisions-07-may-2020.html

For details of HACAN’s reaction, together with an explanation of what this might mean: https://hacan.org.uk/?p=6040

For details of the earlier verdict by the Appeal Court: https://hacan.org.uk/?p=606

Aircraft have been using shorter routes during COVID

NATS (National Air Traffic Control) confirmed to the Sunday Times that a number of planes have been guided along shorter, sometimes different, routes as it takes advantage of the quieter skies.  These routes have saved time, fuel and CO2.  HACAN was quoted in the Sunday Times as welcoming these improvements which we do but the second part of our quote that the routes must also cut noise for local communities did not appear in the paper.

Flight paths are the top topic people search for on our site. For basic information, click on the side-bar or scroll down this page. We are always happy to answer your questions. Email johnstewart2@btconnect.com

Our latest blog examines the reasons why flight paths are residents’ biggest concern and calls on the industry to use the reform of flight paths that was underway before lockdown to improve the lot of communities https://hacan.org.uk/blog/?p=660

There may be delays in reforming flights paths because one of the things driving the changes was the predicted growth in air travel which because of COVID is going to be less than expected, certainly over the next few years.

You might be interested in our 2017 report on London’s Most Overflown Boroughs (includes Heathrow and London City aircraft): report

Why is wind direction important?  Planes need to land and take-off into the wind (unless the wind is less than about 5 knots). But it is wind direction at 3,000ft that is the determining factor.  In a typical year, the west wind blows about 70% of the time.

Are there fixed routes?  In some places. For the final 8 or so miles before landing, planes are expected to be lined up with the runway.  And on departure must stay on their flight path until they reach at least 4,000 ft.  Otherwise nothing is fixed though in practice some areas are much more overflown than others.

Will I be overflown all-day long?  It depends where you live.  If you are under the final approach as planes arrive over West London, you get a half day’s break as planes switch runways at 3pm.  Elsewhere, you can get all-day flying.

Will a third runway affect flight paths?  It will need the creation of new arrival flight paths lined up with the new runway. And also some new departure routes.  It will mean more planes of some of the existing approach paths.  But is may mean fewer planes over communities further from the airport as Heathrow has said it will introduce rotating flight paths to give these places relief.

Will flight paths change?  Yes, new the introduction of new technology will mean the introduction of more precise routes (at airports across the world) whether or not a third runway is built.  We won’t know the details of these new routes for several years yet.

For more on flight paths, click on the side-bar or scroll down this page.

Poll shows people enjoyed the peace and quiet of lockdown

Heathrow has suspended work on a 3rd runway until its future becomes clearer.  That means that the short consultation planned for this Spring will not happen.  Heathrow had intended to submit its planning application in the autumn for consideration at a Planning Inquiry.  That has been put on hold.

The Coronavirus lock-down has revealed a lot of anger amongst airport communities at the way they have been treated by their airports over the years and a feeling that it has taken the coronavirus crisis to give them some of the peace and quiet they have been yearning for.

Communities are looking for a better, fairer deal.  The Government has a real opportunity to ensure this happens in its forthcoming Aviation White Paper.  A dozen airport community groups across the UK have signed a proposed community contract with airports.  It builds on some of the proposals in the DfT’s Green Paper and also on some of the processes and ideas which Heathrow has been developing.

You can read the proposed contract here:  http://hacan.org.uk/wp-content/uploads/2020/06/Community-Contract-with-their-airport.pdf

New Report:  London City has overestimated economic benefits of expansion by up to 50%

A major report, published today, has found London City Airport has overestimated the economic benefits of its expansion proposals by as much as 50%.  The report, commissioned by campaign group HACAN East from the independent Dutch consultants CE Delft (2), shows that the benefits of the proposed expansion would be over £200 million less than the airport has claimed.

A  short briefing on the report:  http://hacan.org.uk/wp-content/uploads/2020/03/CE-Delft-report-briefing.pdf

We get more emails and queries about this than anything else. The answer is that since 1996 there have been no formal changes.  But two things have happened.  Over the last decade or so departures have become increasingly concentrated down the centre-line of the Noise Preferential Routes (the three mile wide area they must stay in when leaving the airport) and the corridors used for arrivals have become more concentrated.  It means some areas are getting many more planes and others less.

Additionally, air traffic controllers are permitted to vary the number of planes over individual areas as they guide aircraft in and out of the airport. An increase in flights can also occur if there are more flights arriving from or departing yo particular destinations.

Are aircraft on arrival flying lower?

HACAN carried out a short survey on this in March 2020.  Heights have remained about the same over the last decade.  Generally all aircraft are still flying at much the same height, but because more of them are now larger, heavier aircraft (which are often louder), this larger size and increased loudness gives the false impression of them appearing to be lower:  http://hacan.org.uk/wp-content/uploads/2020/03/Heights-of-aircraft-since-2010.pdf

Are aircraft on departure flying lower?

In July 2018 the Civil Aviation Authority published a major report on departures.  It found that some aircraft were lower on departure.  Summary of the report: https://publicapps.caa.co.uk/docs/33/20180719%20CAP1691a%20Departure%20Noise%20Mitigation%20Summary%20Report.pdf

A four pager from HACAN with everything you want to know about quieter planes: http://hacan.org.uk/wp-content/uploads/2020/06/Quieter-planes-1.pdf Heathrow  is planning the biggest change to its flights paths since it opened in 1946.  It will have a fundamental impact on residents.  Flight path changes will happen with or without a third runway.  The are technology-driven, not runway-driven.

NOTE THAT THE TIMETABLE FOR THE CHANGES MAY SLIP DUE TO THE COURT OF APPEAL’S RULING ON THE THIRD RUNWAY.  NEW FLIGHT PATHS CANNOT BE FINALISED UNTIL IT IS CLEAR IF HEATHROW IS PLANNING FOR A 2 OR 3 RUNWAY AIRPORT.

We will not know the proposed new flight paths until 2022

For more details on the proposals:Heathrow Flight Path Consultation: January to March 2019: Details on consultation and responses

For details read the noise section of the HACAN Briefing

You can find maps of flight paths on Heathrow’s website: http://www.heathrow.com/noise/facts,-stats-and-reports/operational-data/annual-flight-maps

You can also track flights as they land and take-off: http://webtrak5.bksv.com/lhr4

And you can see what the flight pattern was like over your house during the past six years: http://xplane.bksv.com/xplane/

Check out our flight paths button for info about current flight paths and up-to-date developments, including some Heathrow initiatives to reduce the noise from planes in flight:  https://hacan.org.uk/?page_id=3311

HACAN is lobbying for short-term action to improve noise and flight paths.  Read our report: https://hacan.org.uk/?p=5135 A good inaugural meeting  of the North London Aircraft Noise Campaign, organised by Giovanna Iozzi, took place at the end of February. HACAN will be working with the campaign on a study assessing why people have become more disturbed by aircraft noise in parts of Haringey in recent years.

Here is a great video HACAN East has produced and released today showing not only what it is like to live with London City – and Heathrow – planes flying overhead but also what possible solutions might look like: https://youtu.be/KAnKUlxg7EY

Heathrow still in a noisy league of its own

The numbers are taken from the latest noise action plans published by the UK airports in early 2019. Many people are in despair about the constant noise over their heads.  95% of the emails HACAN gets contain a complaint are from areas which get no respite from the noise.  Read more here

We also get a lot of questions about the metrics used to measure noise annoyance. A short HACAN paper explaining noise metrics.

And why Heathrow is using much better metrics to measure noise annoyance than before: click here

ExPlane is a new app to measure aviation noise which the public can use.  See here

Here’s a list of the European airports which overfly the most people: http://hacan.org.uk/wp-content/uploads/2020/04/European-Airports-numbers-impacted-2.pdf

The impact of a Third Runway

A new runway at Heathrow would mean just over 700 extra flights each day.  A total of 760,000 planes would use the airport.  Currently there is an annual cap on  flight numbers of 480,000.  A third runway would mean people in West London under the existing flight paths will lose part of the half day’s break from the noise they currently enjoy. It would of course also mean many people under an arrivals or departure runway for the first time. On March 21st 2017 a new coalition was launched to oppose a third runway at Heathrow.  The No 3rd Runway Coalition consists of 18 organisations and is backed by MPs, peers and local authorities.