HACAN South East is an arm of HACAN.  It was set up in September 2017 to give a voice in particular to people living under the flight paths in SE London (roughly from Clapham to Eltham). 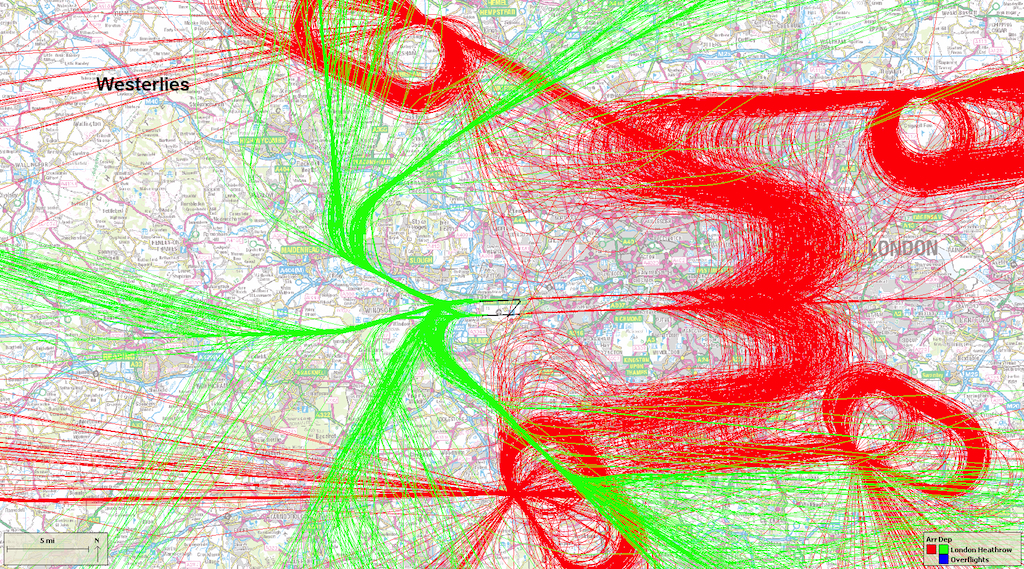 A visual representation of aircraft movement linked to Heathrow – Green represent arrivals resulting from westerly winds (30% of the time), Red represent easterly (70% of the time).

Find out the key things we are campaigning for:  http://wp.me/P5NPQ9-13m

If you want to find out more about us or are keen to help us email either: info@hacan.org.uk

Details are on the main HACAN Page but the Airspace Consultation is particularly important to people in SE London.

Consultation Venues: further east than ever before

In a recognition that people are impacted by aircraft noise much further from the airport than previously acknowledged.  On Friday 16 Feb (12- 8pm) there will be an exhibition for the first time in Vauxhall.  The venue , Wheatsheaf Community Centre, Wheatsheaf Lone, off South Lambeth Road is easily accessed from Brixton, Clappham, Oval, Waterloo and Camberwell.

HACAN, though, is in discussion with Heathrow to have two extra meetings: one further into SE London; one in NE London.

Parts of SE London are also overflown by aircraft arriving at London City Airport when an east wind is blowing.  This wasn’t too much of a problem until the flight paths were concentrated in February 2016.  Since then the planes have been concentrated over Eltham, Mottingham, Catford, Dulwich, Brixton, Stockwell, Oval and Waterloo.  The Civil Aviation Authority (CAA) are expected to comment on these concentrated flight paths by the end of this year.  We’ll bring news of that as soon as we get it. HACAN South East was launched on 27th September at a packed public meeting at the Oval.

Not just a West London problem – people relate their experiences on video of living with aircraft noise. When people get annoyed by noise

The Government has recognised that people get annoyed by aircraft noise at lower levels than it previously thought. It now accepts the noise from Heathrow can annoy people in SE London.  Its Airspace Strategy, published in October 2017, recognised that people can get annoyed by aircraft noise when it averages out over a 16 hour day at 54 decibels.  Previously government argued it was 57 decibels. Some people get annoyed at even lower levels.

The figures are based on a study which the Government commissioned from the Civil Aviation Authority (CAA): Survey of Noise Attitudes 2014. The chart above, taken from the study, compares the results of the Government sponsored ANIS Study with the new study. 9% of people are highly annoyed when the average is 54 decibels.  In geographical terms around Heathrow that goes as far as about Clapham to the east and about 16 miles to the west: about 65,000 people in total.  The lower average of 51% extends about as far as Peckham.

And you can read here the HACAN South East summary of the Government’s new Airspace Strategy:   http://hacan.org.uk/wp-content/uploads/2017/10/Airspace-Policy.pdf

Out and About Campaigning 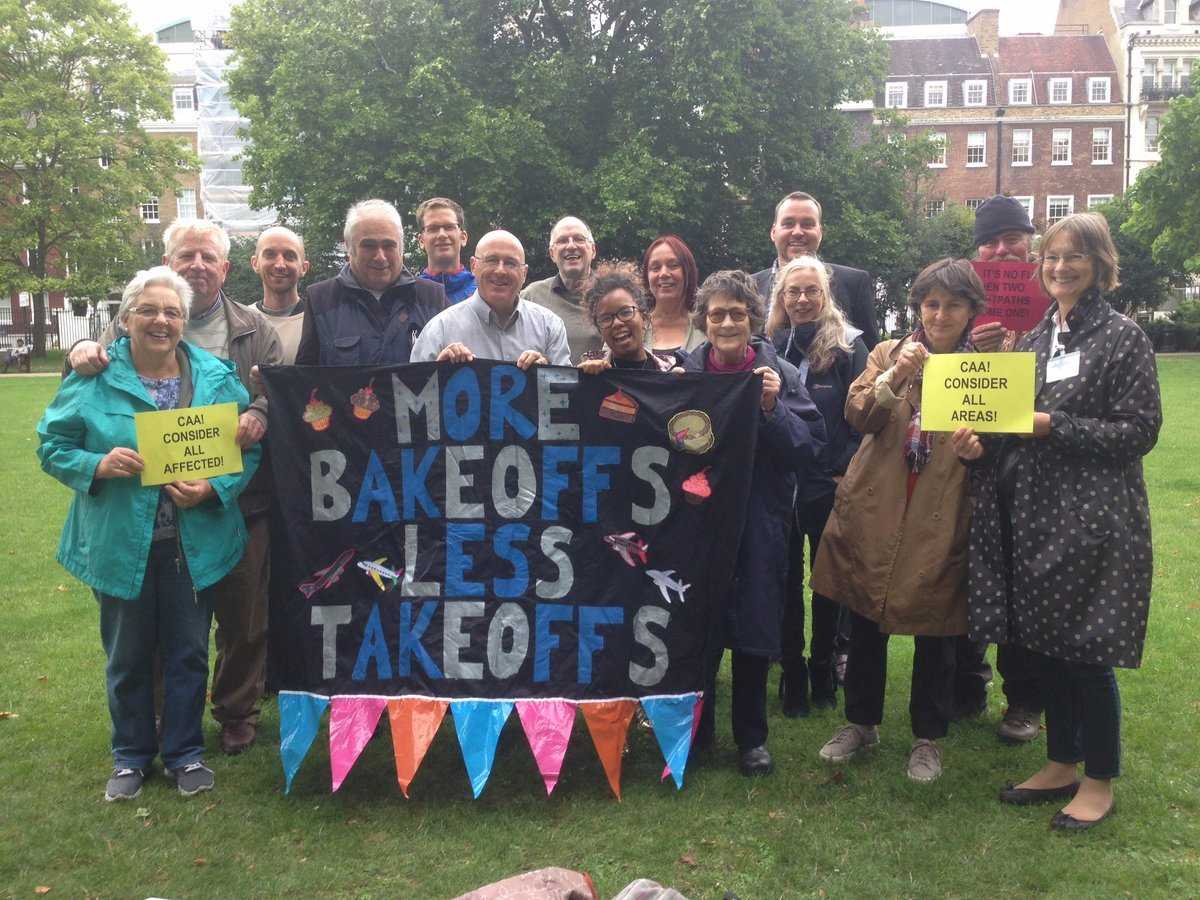 We were joined by Keith Prince AM, current Chair of the GLA Transport Committee. The presentation was timed to ask CAA, in the lead up to their flightpath proposals for City Airport, to take into consideration all people and all areas of London who will be affected by their recommendations.

The CAA entered into the spirit of the event with a picture of the cake accompanying this tweet: 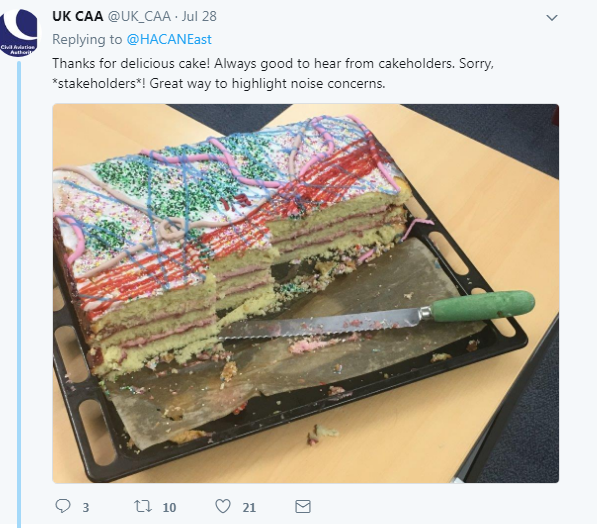 Mr Prince extended an invitation to Campaigners to meet him at City Hall in September. He has promised to take our concerns regarding dedicated flight paths, as well as other plane-related issues, and how they affect residents of East and South East London to Mayor of London Rt Hon Sadiq Khan.

Although many residents feel that the problem of Heathrow planes has got worse in recent years as it seems flight paths have narrowed, the big change took place in the mid-1990s when planes began joining their final approach to Heathrow much further east than before.  Previously they had tended to join it around Barnes.  From about 1996 many started to join in SE London.  Thus, many people became ‘the new neighbours of Heathrow’.

And the summary of a major report commissioned by HACAN:  http://hacan.org.uk/resources/reports/hacan.flight.paths.study.pdf

And one made in October 2017 where local residents graphically describe 30 years of living with London City Airport: https://youtu.be/6dMy7cGUVo4